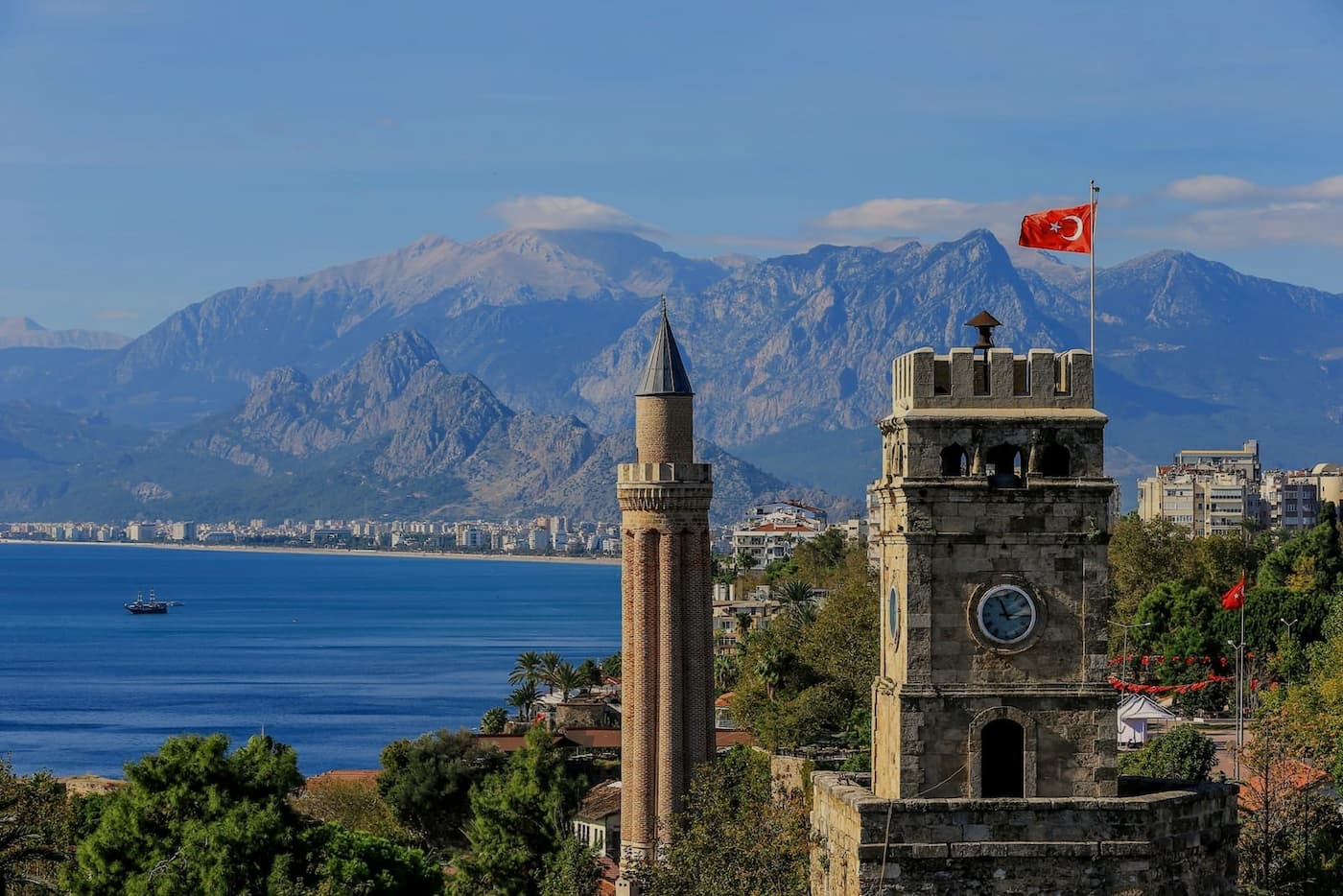 The southern border of the province is the Mediterranean Sea while the Taurus mountains draw the land border. Elevation of the mountain range goes up to 3000meters from sea level. Because of the Taurus Mountain ranges, It is vary interms of climate, fauna, flora, rivers, waterfalls and more.

There are sites of historical and archaeological interest all over Antalya

Antalya is the 5the biggest city of Turkey with about 1,5 million population. Itself and towns in its boundary are some of the most popular holiday destination in Turkey. Antalya Airport welcomes direct flights from all around Europe and Asia during summer season. The majority of Hotels in Turkey are located in the southern city of Antalya, a long standing tourism hotspot offering over 400,000 beds and 260 five-star hotels.

Antalya province itself known as Turkish Riviera and It features a shoreline of 657 km (408 mi) with beaches, ports, and ancient cities scattered throughout, including the World Heritage Site Xanthos.

Perge was an ancient and important city of Pamphylia Region. It is about 15km on the east side of Antalya city center.

Perge wwas described as PARHA in the Hittite inscriptions. Collonization started by Greek immigrants in 7th century BC. Alexander the Great been in Perge and liberized it from the Persian invasion. Later on, Roman Empires ruled it and city had its greatest period in the history. City was re-builed with major public structures such as theatre, stadium, fountains, agora, collonnaded street and more.

Christianity started to spread during the Roman era. St. Paul the Apostle and his, companion St. Barnabas, twice visited Perga as recorded in the biblical book, the Acts of the Apostles,[11] during their first missionary journey, where they “preached the word”After Roman Empire, it was rulled by Byzantine Empire. As nearby city Attalia (today’s Antalya) started became more popular and a better place to live, Perge was abondend totally in the 10th century. When the Turks came to the area, it was already ruined down and Perge turned in to a little tiny village.

Perga is today an archaeological site and a tourist attraction. Here are some stuctures that can be seen in Perge

Stadium is located by the bus parking area and a typical Roman structure. They used it for games and races back in the Roman time. Sometimes gladiator fights and wild animal fights took place in the stadium. Only free men who has the citizenship of the city could to watch the races. 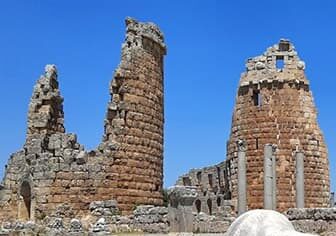 Back in the 3rd Century BC, it was the main entrance to the city through from the city walls. As the city extended back in the Roman time, it stayed in the boundary of the new Roman City walls. Then it was like a welcoming courtyard. 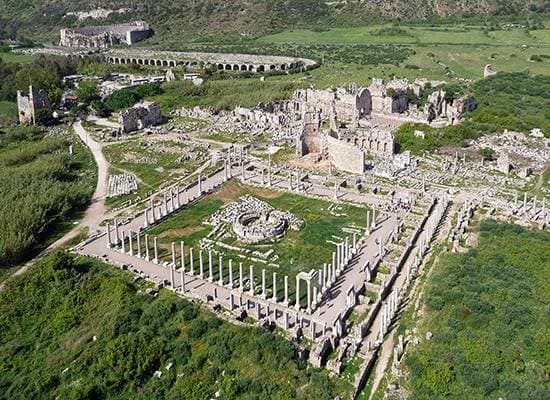 Agora was the market. It has almost a square shape. There is circular temple in the center. There are shops on the four side of it with a pavement at the front and stoa. The coloums that can be seen today were holding the wooden roof of stoa. 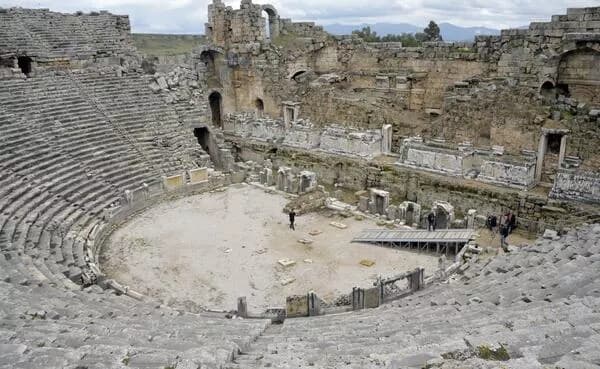 Theatre of Perge is a typicall Roman Theatre with a sitting capacity of 15 thousand people. It is closed to visitors due to on going restoration works. 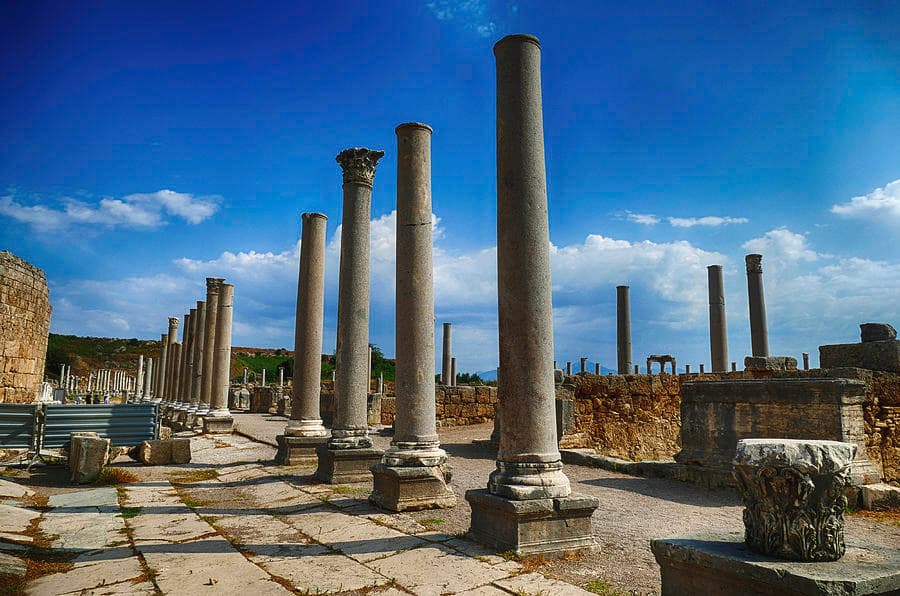 Collonated Street was the main street of Perge. Shops were placed on the both side of the street and a decorational water channel was placed in the center. It starts right after the Hellenistic Gate and goes all the way down to the slope of Acropolis.

Agora was the market. It has almost a square shape. There is circular temple in the center. There are shops on the four side of it with a pavement at the front and stoa. The coloums that can be seen today were holding the wooden roof of stoa. 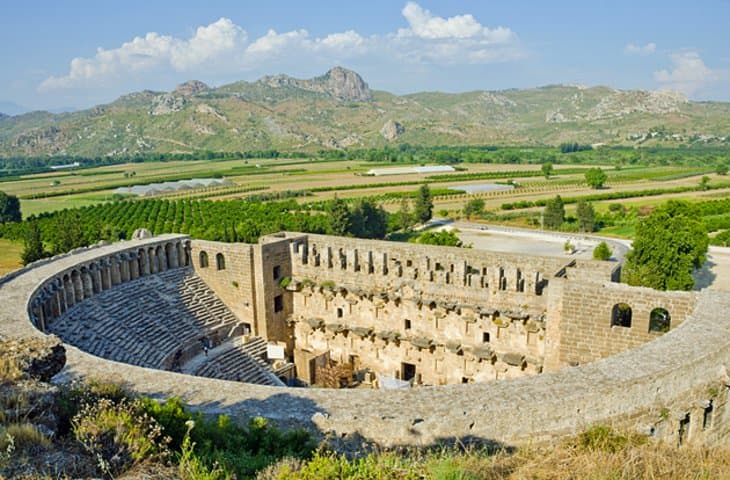 Aspendos is located about 50 km at the east of Antalya. This ancient city is under excavation. Visitors can visit its famous theatre as an archeological site.

The theatre in Aspendos is considered to be the best-preserved theatre of antiquity. The Roman builders of this structure managed to express the state of ideal balance between the auditorium and the skene building and, what’s more, the whole theatre matches perfectly into the landscape.

According to a legend, the construction of this theatre resulted from the competition organised by the ruler of Aspendos. The aim of this competition was to build a structure that will contribute most to the city’s prosperity. The awarded was the daughter of the ruler. Two competitors qualified to the final round.

The first of them constructed the system of canals and aqueducts that supplied Aspendos with running water. The ruler was almost convinced to give him the hand of his daughter but decided to visit the theatre, built by the second competitor, for the last time. When he stood on the highest point of the theatre, suddenly a clear voice whispered directly into his ear: ‘Your daughter must be mine!’ When he looked around in surprise, he saw the builder of the theatre standing on the scene. The theatre’s acoustics impressed the ruler so much that he immediately decided in favour of its builder.

Phaselis is 16 kilometres (9.9 mi) at the south of the tourist town of Kemer and on the 57th kilometre of the Antalya–Kumluca highway. Phaselis and other ancient towns around the shore can also be accessed from the sea by daily yacht tours.

Collonists from Rhodians established the city in 700 BC. In orderly, its was ruled by Persians, Alexander the Great, Roman Empire and Byzantine. As the inner harbour silted before the Turks came to area, it really suffered from malaria. Addition to that eartquakes brought the end of the city and it was abondend

Today it is one of the most popular archeological site and tourist attraction in Antalya. 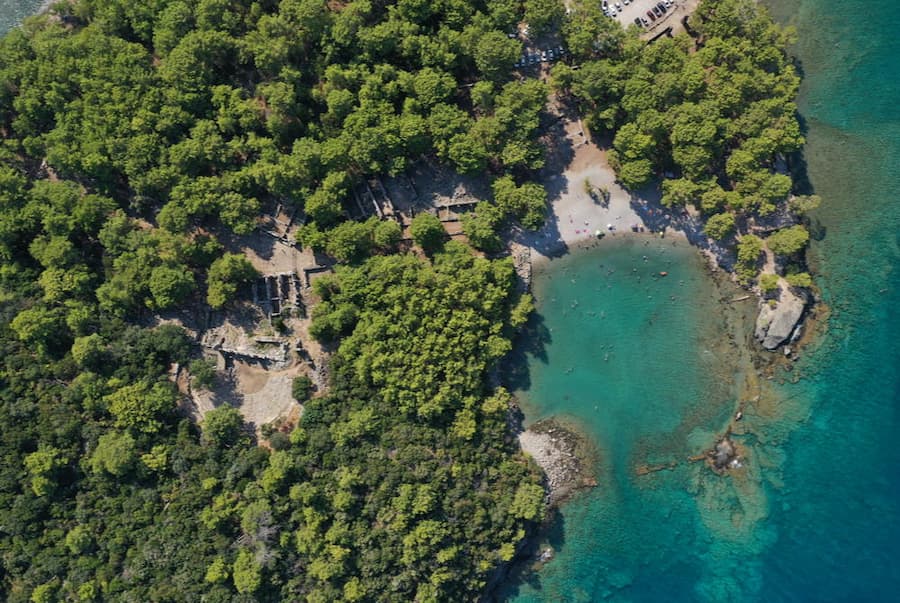 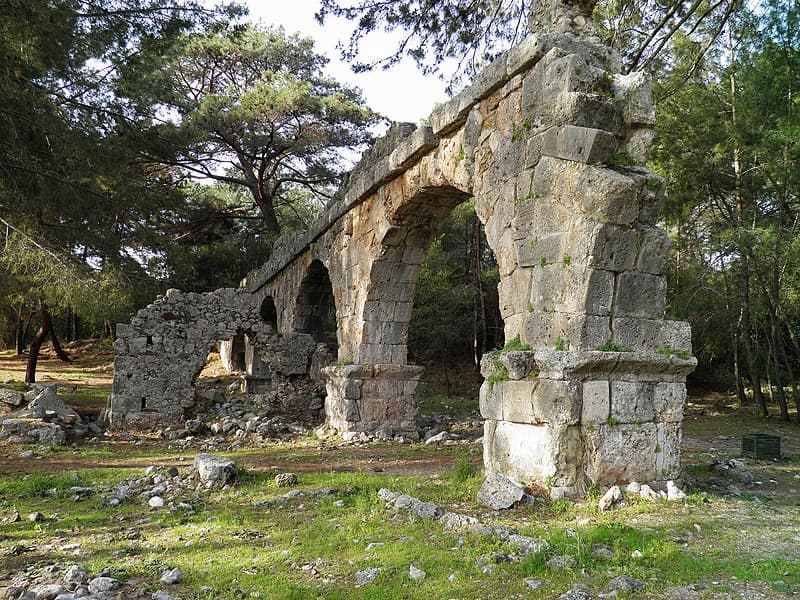 You can see the ruins of Aquaducts in Phaselis just by the car parking area, before get to the nort harbour. They built the Aquaducts to carry the water in to the city from nearby water spring. The lenght of the Aquaducts are about 0,5km 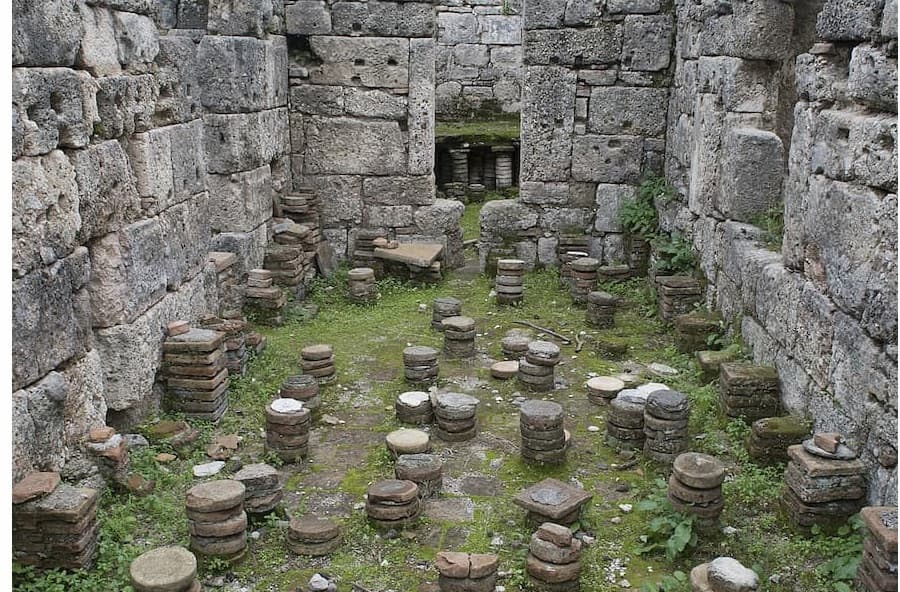 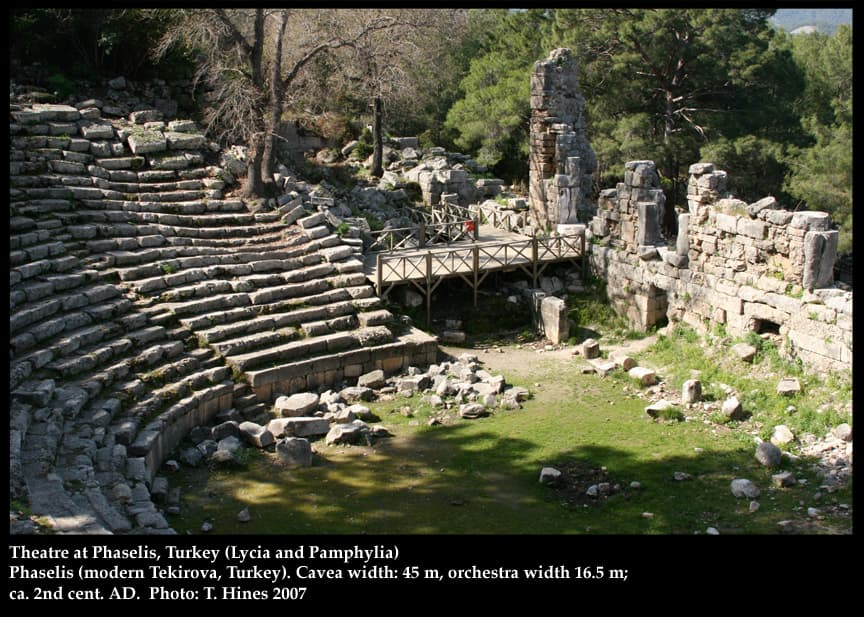 Theather of Phaselis is dated back to 2nd century AD and located almost right on the main street. It is lean on the slope hill and have the view of Beydagi (or Ancient Olympos Mountain) at the back. Theather was able to hold about 3 thousand people.

Collonated Street was the main street of Perge. Shops were placed on the both side of the street and a decorational water channel was placed in the center. It starts right after the Hellenistic Gate and goes all the way down to the slope of Acropolis. 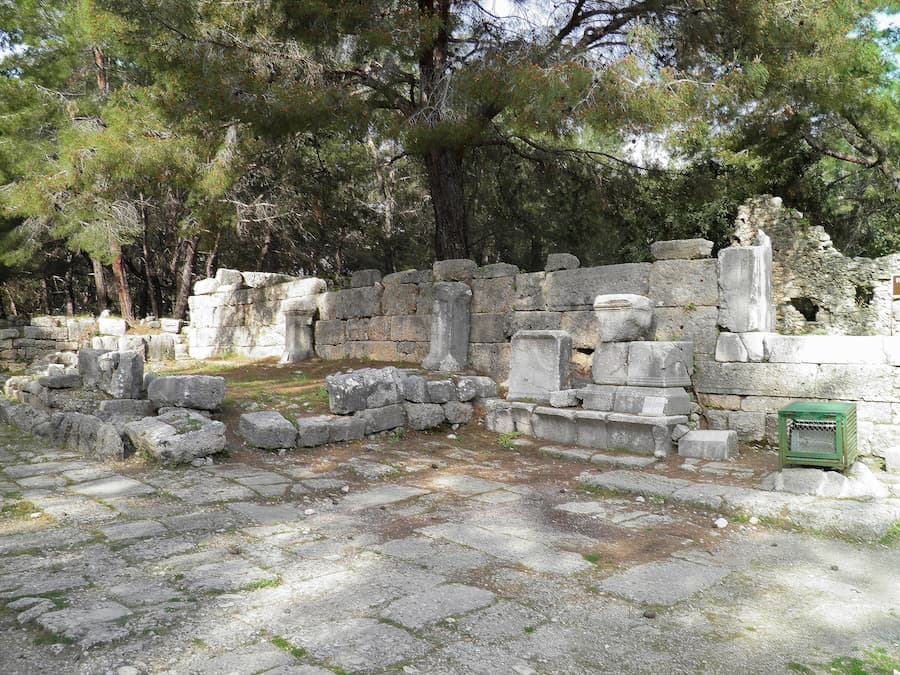 Agora was the market section of Phaselis. Phaselians were selling the goods and products in that structure. According to archeological evidences, it is known that Phaselis exported timber, olive and pomogranate. Also, It was a place for slave trading too. 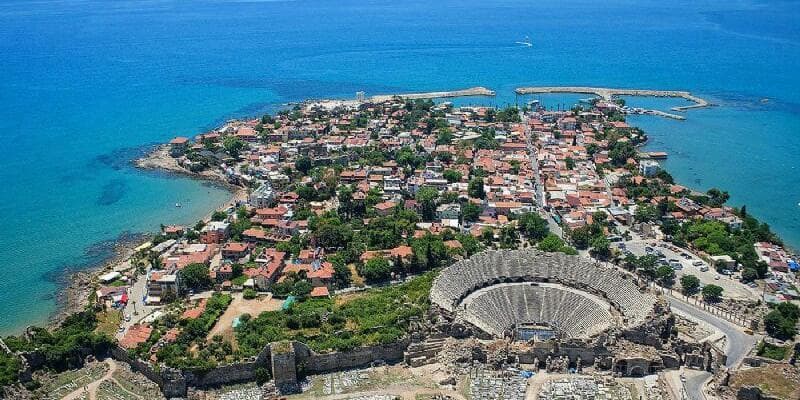 Side is a resort town on Turkey’s southern Mediterranean coast. An ancient port city, it’s known for long beaches and Greco-Roman ruins. It is a peninsula and you can see the actual town and ancient city together.

It is near Manavgat Town and about 75km on the east of Antalya. Firstly, The site from Vespasian Gate to Apollon Temple is the touristic bazaar of the town. In conclusion, There are plenty of shops, restaurants, pensions within the small tiny streets. 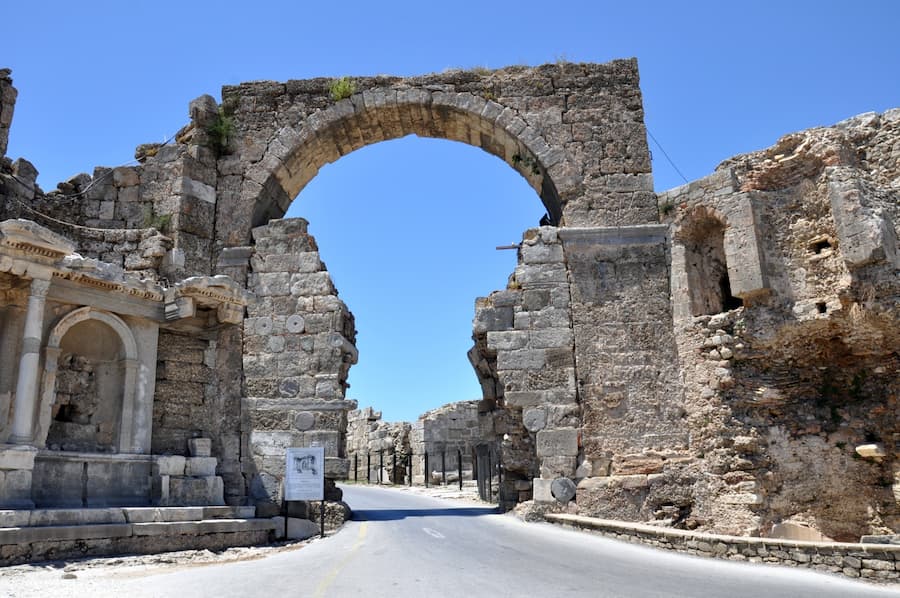 When you drive to Side, the tarmack road will take you through an arched gate by the Theatre. Vespasian Gate was one of the main entrance to the city back in the Roman time. Emperor Vespasian commissioned the gate. 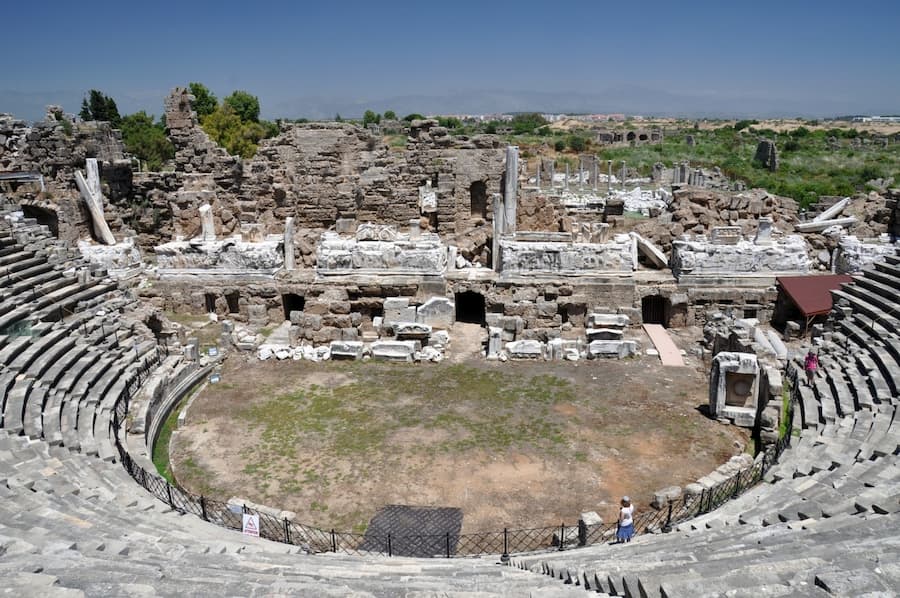 Theatre of Side is one of the greatest sample of Roman Theatre. Landscaping is flat, therefore theatre can not lean on the slope of a hill. Then roman arches were built to support the seating area. Capacity of the Theatre is about 15 Thousand. 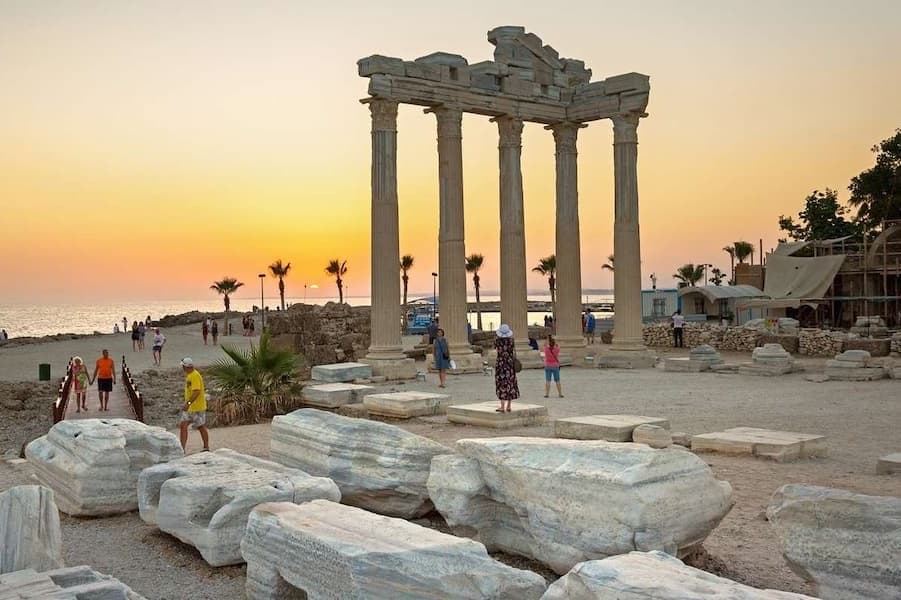 Apollon was the god of Sun,  light and beauty. People of the Side and sailors adored Apollo and sacrificed animals for him before taking an important decision . Temple had corintian style coloums but nothing too much left. Byzantines dismantled it to built basilica and some other structure. 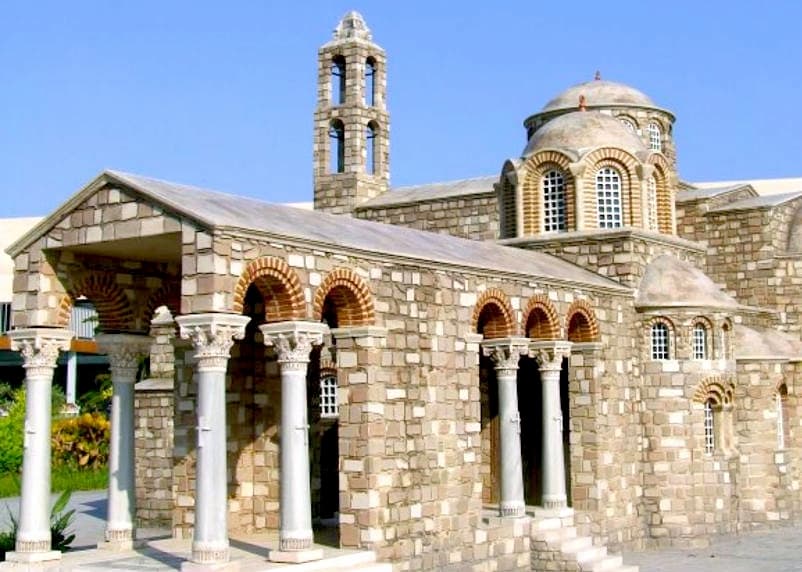 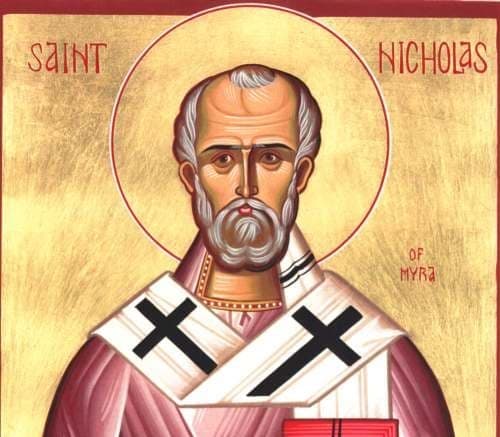 SAINT NICHOLAS OF MYRA (IN DEMRE)

They built the church above the burial place of St Nicholas, a 4th-century Christianbishop of Myra, an important religious figure for christianity and the historical inspiration for Santa Claus. St Nicolas was born in a Patara, a nearby city and later he became the bishop of Myra.

Silts covered the church beacause of floodings over time. So, in 1862 Russian Emperor Nicholas I restored it. He added a tower and made other changes to its Byzantine architecture. St Nicholas is the protector saint of Russians. Then, The church continued to function until its final abandonment in 1923. The remaining Greeks of Demre had to leave Myra/Demre because of the Population exchange between Greece and Turkey.

Kekova is not only known for its gorgeous turquoise sea but also its ancient and mysterious sunken city. The island of Kekova totally abondend and is under protection by Turkish Ministery of Enviroment and Forest’s since 1990.

To get to Kekova Island, you need to drive to Üçağız Village where is just accross the Kekova Island. About 2 Km at the west of Üçağız Village , there is also another village called Kaleköy. There is no road going Kaleköy, you can only go there by boat. Kaleköy is exactly located right on the top of ancient city of Simena 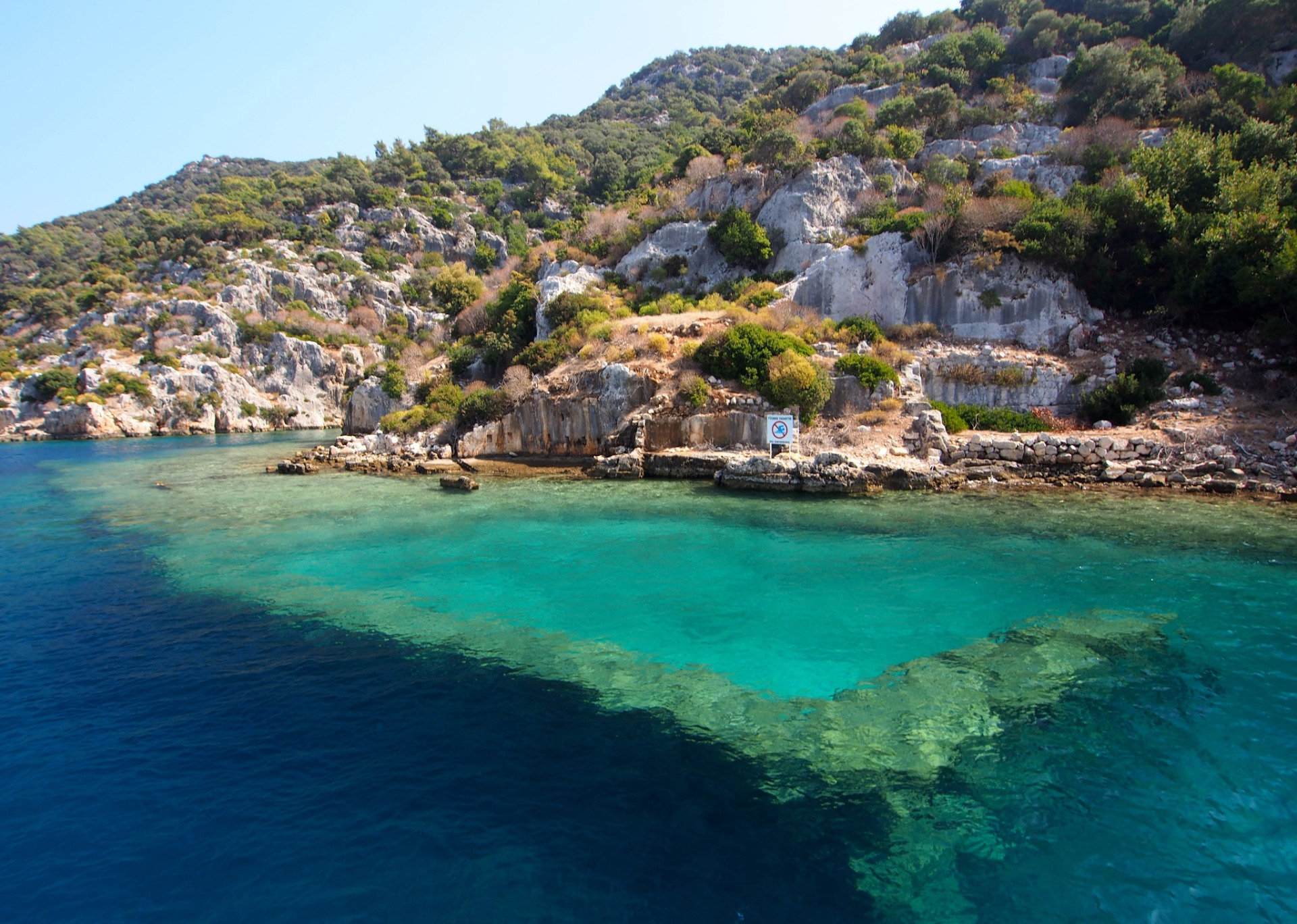 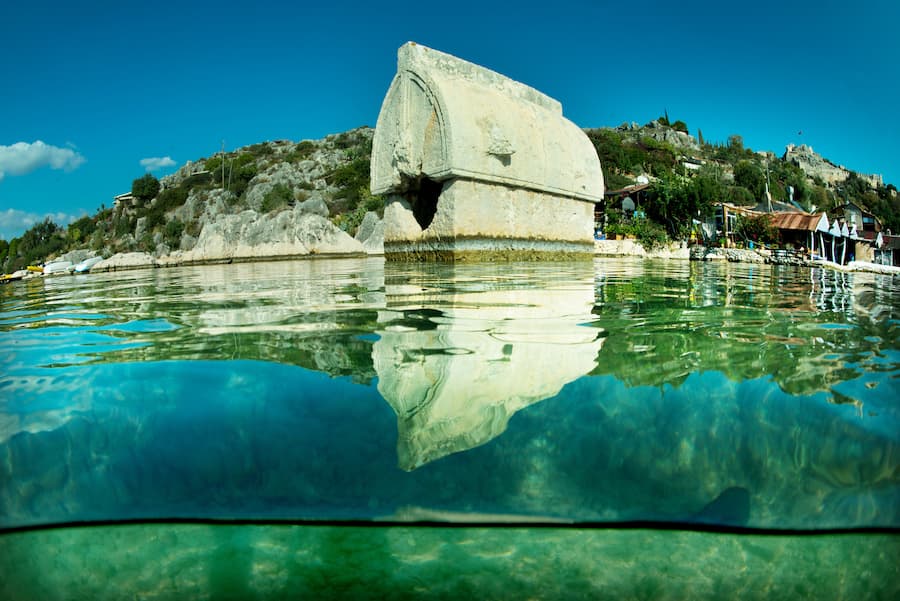 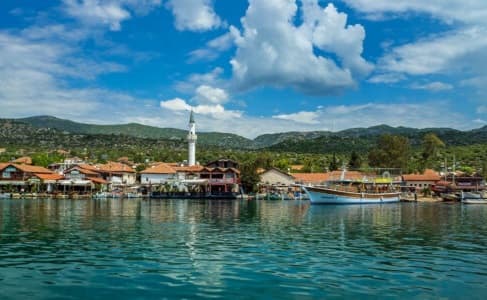 The region has become quite popular with visitors due to its stunning natural and cultural beauty. On the northern side of the island of Kekova, you’ll come across the underwater ruins of Dolchiste, an ancient Lycian settlement. The city was partly overtaken by the sea due to an earthquake in 2nd century. You can sail around the Island but swimming is forbidden around the sunken ruins.

You can also fly to Dalaman (the nearest airport) and stay in a modest pension in the Kaleköy or Üçağız villages. From there, the mysterious underwater town is accessible with rental small boats. In addition, the other more highly recommended option is renting canoes and really taking in the sights at your own pace. 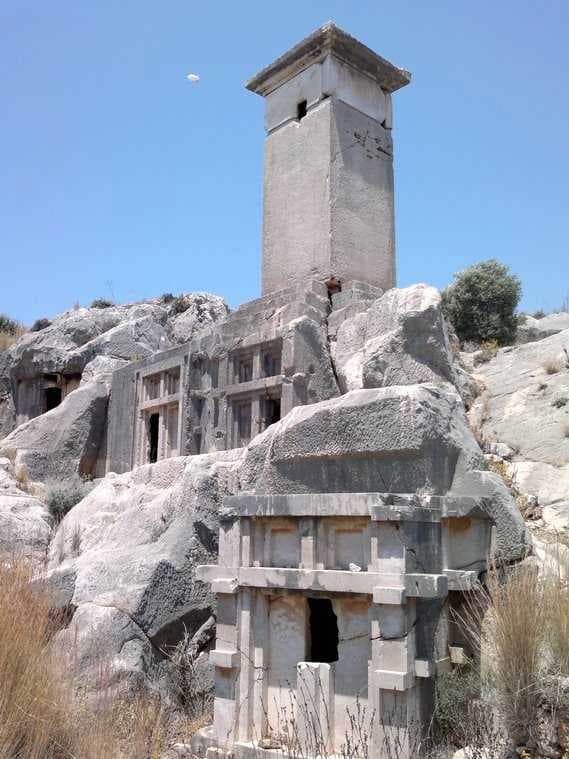 Xanthos was a city in ancient Lycia, the site of present-day Kınık, Antalya Province, Turkey.

The ruins of Xanthos are on the south slopes of a hill, the ancient acropolis, located on the northern outskirts of the modern city, on the left bank of the Xanthos, which flows beneath the hill. A single road encircles the hill and runs through the ruins.

Xanthos is a designated UNESCO World Heritage Site, the centre of the Lycian civilization, exerted significant architectural influences upon other cities of the region, with the Nereid Monument directly inspiring the Mausoleum at Halicarnassus in Caria. It was one of the seven wonders of ancient world.

Homer described the Trojan War heroes and Lycian leaders Glaucus and Sarpedon in the Iliad as coming from the land of the Xanthos River.

Xhantos is located about 200 km at the west of Antalya. Nearest Airport is Dalaman Airport that is 100 km away from site.

There are 3 national parks in Antalya 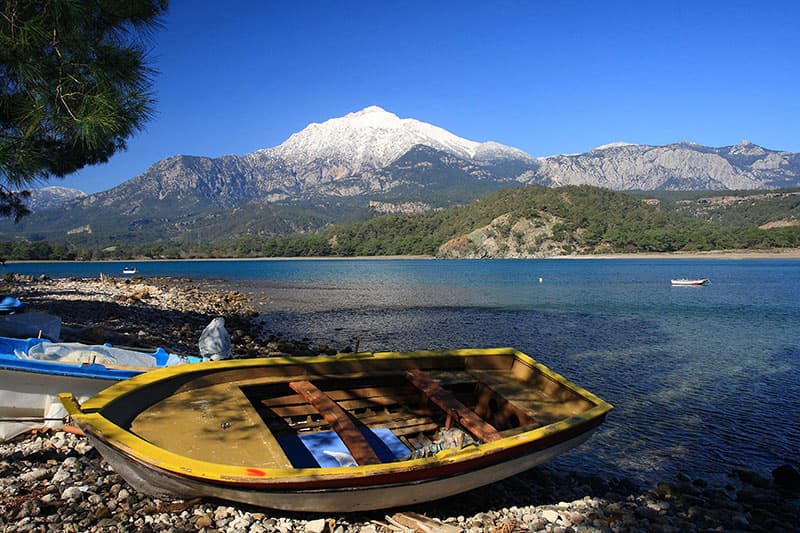 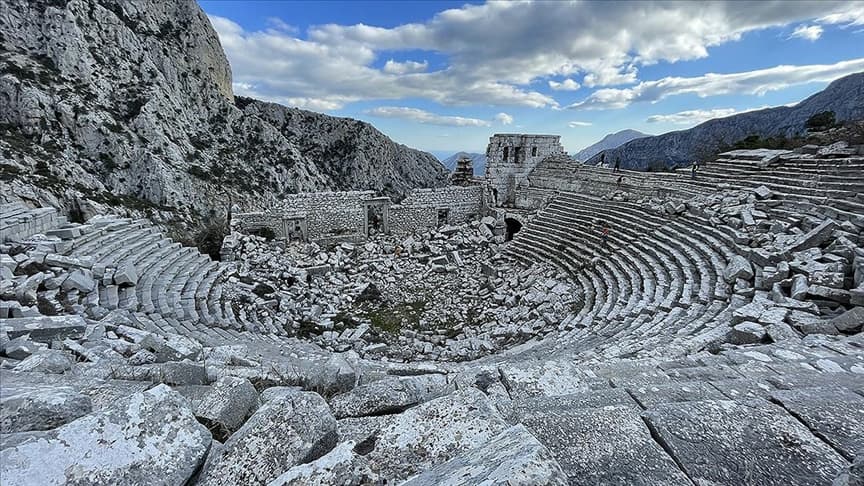 Also, in the boundary of Antalya, there are several waterfalls such as Duden Waterfall, Kursunlu Waterfall and Karpuzkaldiran Waterfall.

By the way, like about 30minutes drive away from the city center, there is a Ski Resort called Saklikent