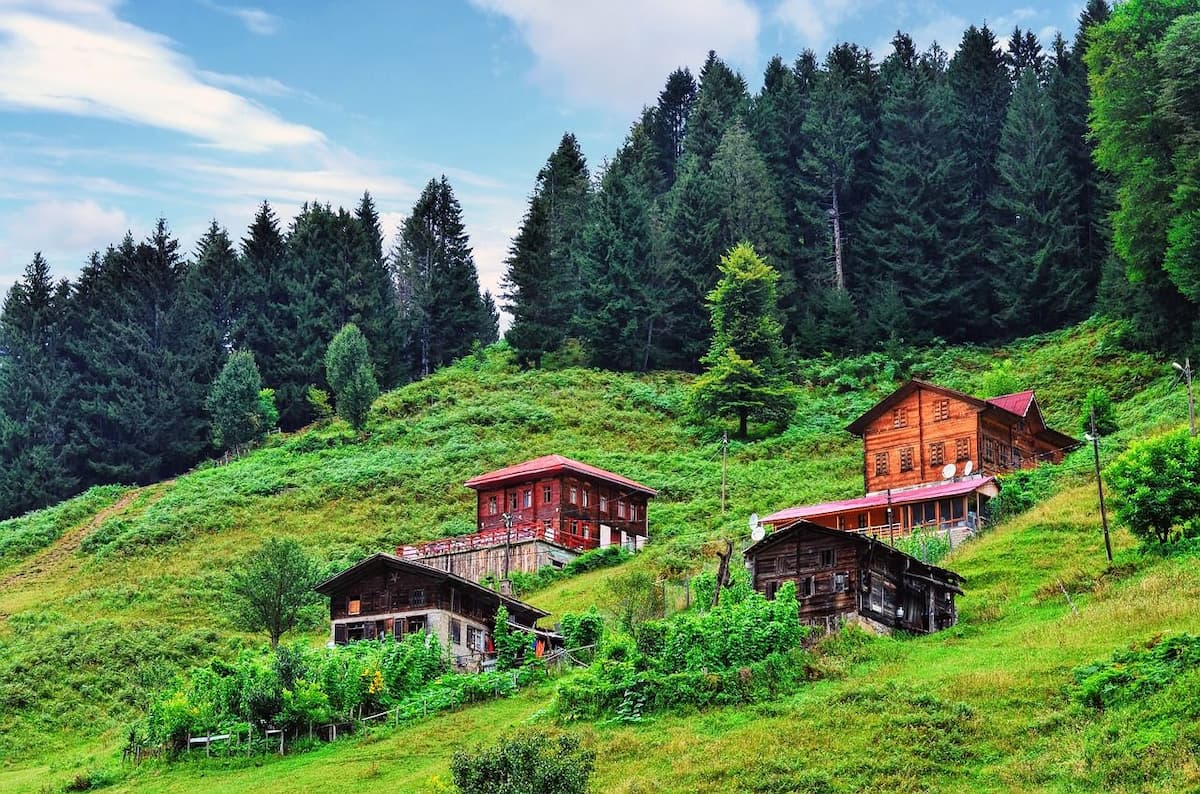 Trabzon is located at the Eastern Black Sea region of Turkey and it is about 1,5 hour away by flight from Istanbul.

Population of the city is about 300k and it has Black-Sea climate which is rainly and wet almost all year around. The mountain ranges behind the city can be over 3000 meters high and houses beatiful highlands.

Places to Visit in Trabzon 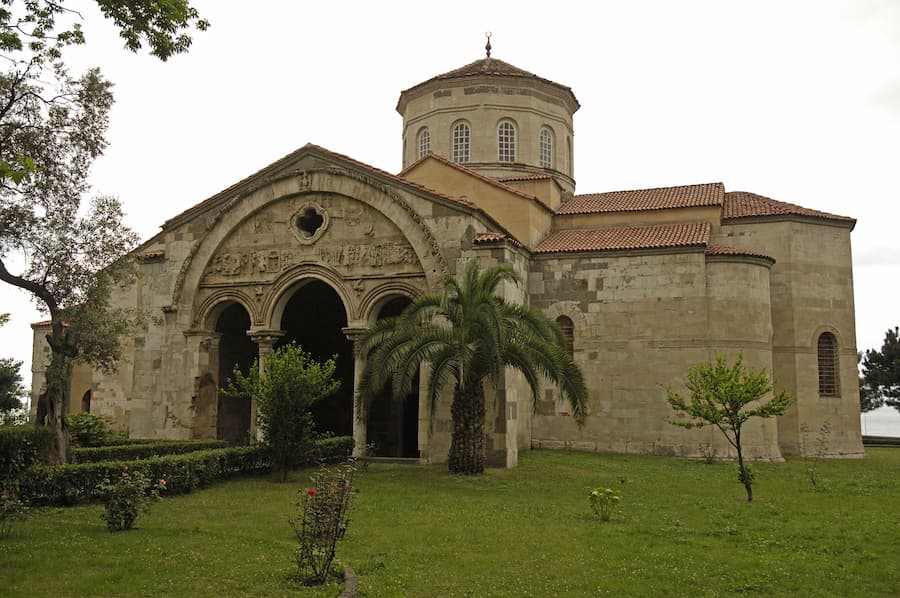 Hagia Sophia is a mosque, formerly Greek Orthodox church. Ottomans converted it into a mosque in 1584. It dates back to the thirteenth century when Trabzon was the capital of the Empire of Trebizond. Hagia Sophia is located near the seashore and two miles west of the medieval town’s limits. It is one of a few dozen Byzantine sites extant in the area. It is finest examples of Byzantine architecture.”

During World War I and for a brief period afterward, Russians occupied the city. They used it as a makeshift hospital and depot. Afterwards it became a mosque again. Then into a museum in 1964. On 5 July 2013, goverment partially converted into a mosque. Visitors can see some of the frescos. 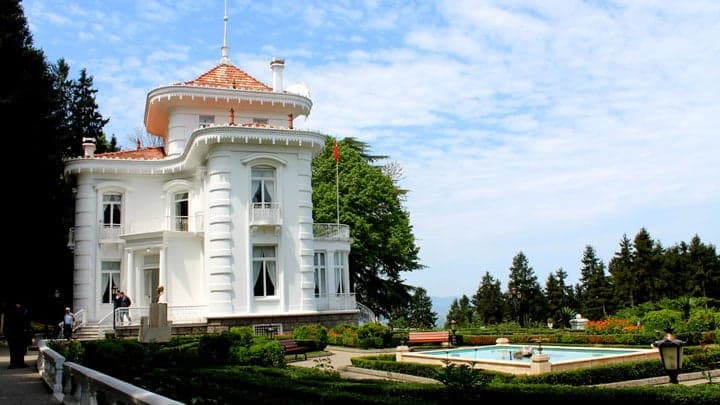 Konstantin Kabayanidis was an Ottoman Greek Banker from Trabzon in the late 19th century. The pavilion was his summer house at the elevated neighbourhood of Soguksu. According to Lausanne treaty, minorieties in Turkey and Greece migrated. As the result of population exchange, Konstantin Kabayanidis ended up to Greece.

His Summer house took the attention of the founder of the Republic of Turkey, Mustafa Kemal Atatürk during his visit to Trabzon in 1924. Devree of Trabzon City Council assigned it to the great leader in 1931.

The great leader made his will and legated all his wealth to the Turkish nation at his room in the pavilion. The pavilion became a museum in 1943. It attracts a great number of visitors from Trabzon, Turkey and abroad ever since. 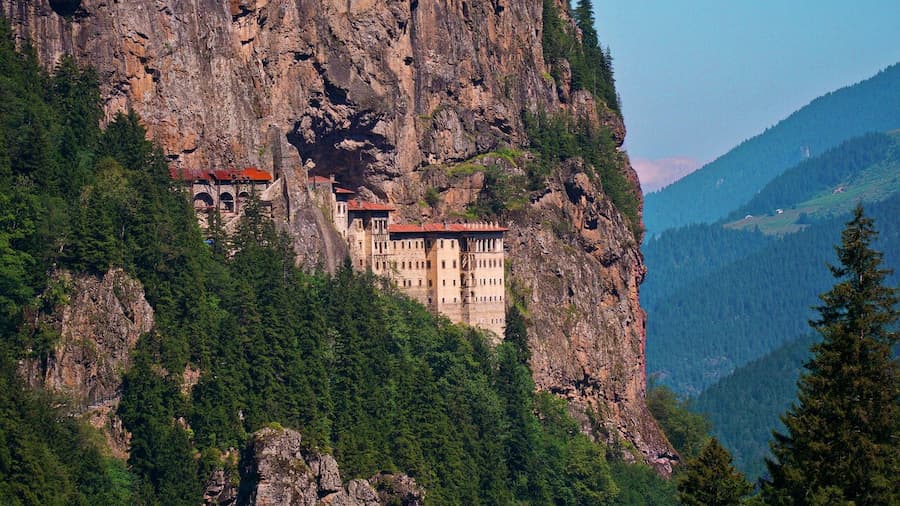 Sumela Monastery was a Greek Orthodox monastery dedicated to the Virgin Mary , about 60km at the north of Trabzon in the boundary of Altındere National Park. It was nestler in a steep cliff at an altitude of about 1200 meters.

It is a site of great historical and cultural significance. As well as a major tourist attraction within Altındere National Park. According to story, two Athenian monks named Barnabas and Sophronios founded the monastery. It became famous for an icon of the Virgin Mary which Apostle Luke painted.

After 1923, Sumela Monastery was abandoned because of the population exchange between Greece and Turkey. In 1930, the wooden part of it was burn during a fire. Also, treasure hunters gave it a big damage. Today, Sumela Monastery is a museum open to visitors from all over the world. Turkish Goverments funds the restoration works 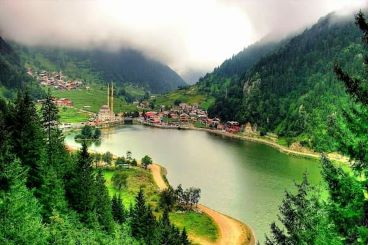 Uzungol was formed by a landslide, which transformed the stream bed into a natural dam, in the valley of the Haldizen Stream.

The area is most famous for its natural environment. Located in a valley between high mountains, the lake and village at first appear inaccessible. The surrounding mountain forests and fog, occasionally enveloping the lake at night, also add to the scenery.