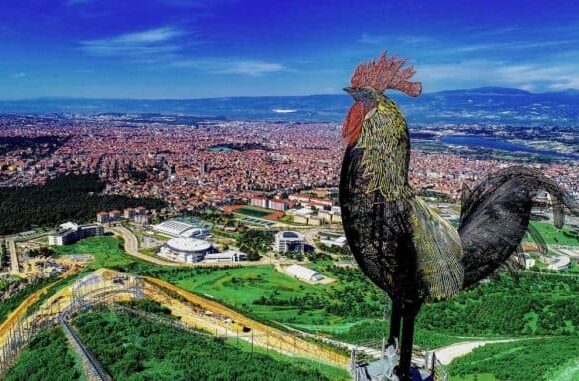 Denizli is an industrial city in the southwestern part of Turkey. Denizli is located in the country’s Aegean Region. It is about 250km at the east of Izmir and 240 km at the North of Antalya. It has an airport and there are regular flights to Denizli from Istanbul everyday. The city has a population of about 600.000.

Denizli has seen economic development in the last few decades, mostly due to textile production and exports.

The most famous touristic site in the boundary of Denizli is Pamukkale where is a Unesco’s World Heritage site since 1985.

Pamukkale, meaning “cotton castle” in Turkish, is a natural site in Denizli in southwestern Turkey. The area is famous for a carbonate mineral left by the flowing of thermal spring water.  Because of the hot water spring, back in the ancient time the city of Hiearapolis was established on top of the travertine formation. 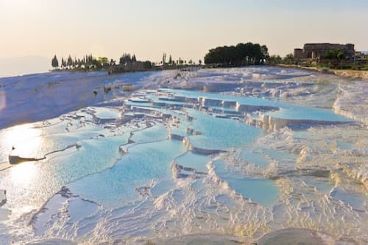 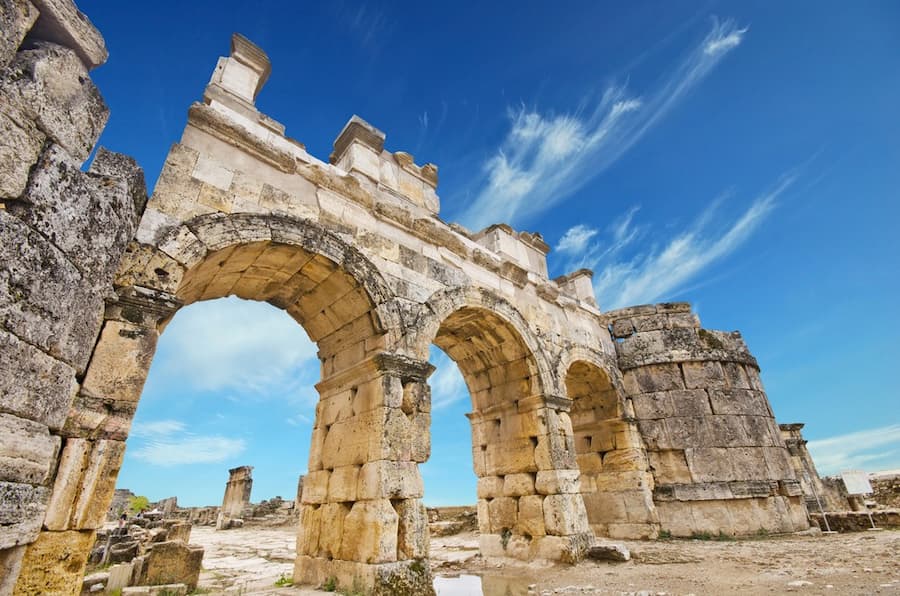 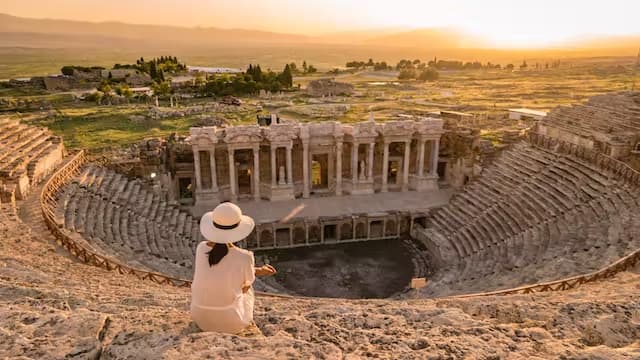 Frontinus Gate in Hierapolis is the monumental entrance to the Roman city. It is worth admiring the well preserved structure with three openings, in carefully squared travertine blocks, with elegant arches decorated with a simple cornice moulding, flanked by two round towers that recall Hellenistic city Gates.

The Theatre was probably constructed under the reign of Hadrian after the earthquake of 60 AD. Theatre overlooks the flats of Lycos River – and the mountain rage at the back with snowy peaks in winter. Theathre can hold up to 15 thousand audience.

During the reign of Septimius Severus at the beginning of the 3rd century, the old scaenae frons was replaced by a new, more monumental one. Sculptural reliefs, displaying mythological subjects, were placed on the different storeys. The transformation was outstanding due to the size of the structures, the high quality of workmanship and materials employed.

An earthquake in Hierapolis in the 7th century caused the collapse of the entire building as well as the ultimate abandonment of the city. Since the 18th century, the monument’s striking ruins have become a recurrent theme in European travellers’ descriptions and engravings.

Several statues, reliefs (including depictions of Apollo, Dionysus, and Diana), and decorative elements have been excavated by the Italian archaeological team and can be seen in the local museum.

Ancient Pool is situated above the Pamukkale’s white travertine pools is one particularly spectacular location fed by the same hot springs. Here you can bath in the same waters in which Cleopatra once swam!  A professionally run modern spa facility allows you to enjoy these historical healing waters and swim along the ancient coloums.

Hierapolis was an ancient city located on hot springs in southwestern Anatolia. Its ruins are adjacent to modern Pamukkale and currently comprise an archaeological museum designated as a UNESCO World Heritage Site. The site has the Tomb of Philip the Apostle.

The hot springs have been used as a spa since the 2nd century BC, with many patrons retiring or dying there. The large necropolis is filled with sarcophagi. One of the biggest necropolis of the ancient world is in Hierapolis.

Today site has two entrances, south gate and nort gate. When you purchase the entrance ticket for Pamukkale, it covers the ruins of the ancient city too. We recommend you to use the South Gate as the walking distance is less to the ruins and water terraces. There are rental buggies which is so comfortable and practical.

Some of the main structures that you can see at sites are as below; 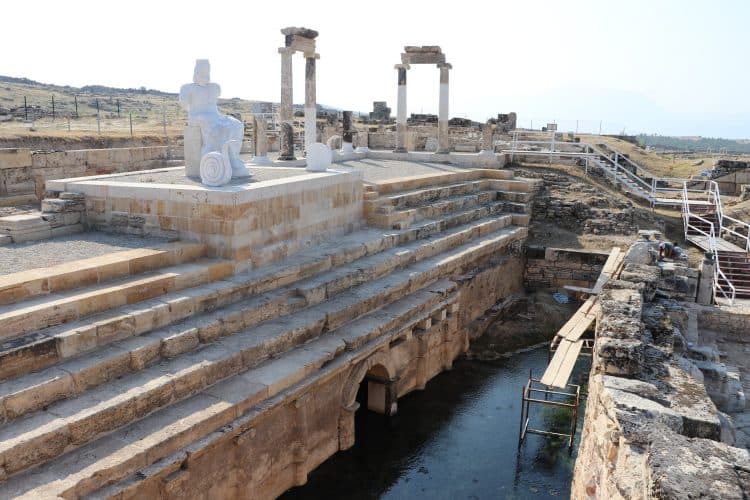 The temple of Apollo was deliberately built over an active fault. This fault was called the Plutonion. It was the oldest religious centre of the native community, the place where Apollo met with Cibele. It was said that only the priest of the Great Mother could enter the cave without being overpowered by the noxious underground fumes. Temples dedicated to Apollo were often built over geologically active sites, including his most famous, the temple at Delphi.

Right behind the Ancient pool, the foundation of a temple dedicated to god Apollo can be seen.

When the Christian faith was granted official primacy in the 4th century, this temple underwent a number of desecrations. Part of the peribolos was also dismantled to make room for a large Nympheum (Fountain) 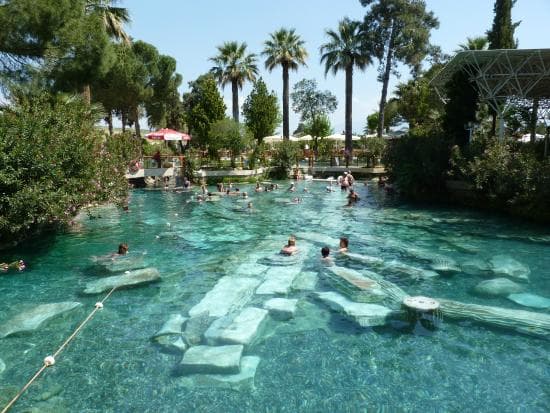 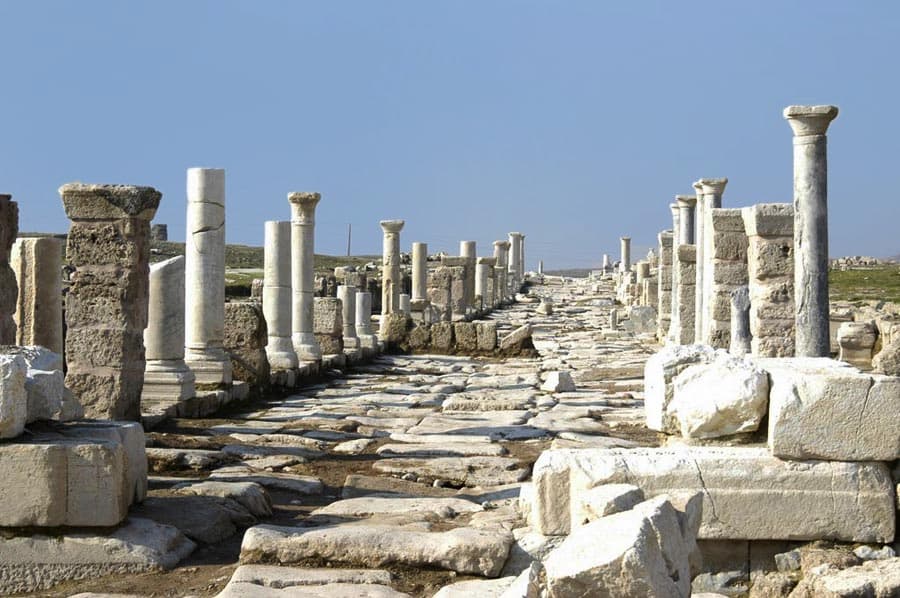 Laodicea is an ancient city located just outside of Denizli and about 8km away from Pamukkale. During the Roman Era, Laodicea used benefits from its advantageous position on a trade route, became one of the most important and flourishing commercial cities of Asia Minor, in which large money transactions and an extensive trade in black wool were carried on.

With its large Jewish community, Very early Laodicea became a seat of Christianity and a bishopric. Laodicea is also one of the seven churches of Asia mentioned in the Book of Revelation.

Laodicea is still being excavated and the city is coming back to surface with new discoveries. Today, Theatre, Main Street, Temple, Church, Collanated Street can be seen and visited.

Kaklık cave was formed by a subterranean stream that slowly eroded the porous limestone and sulfurous rocks. It began to form over 2 million years ago, and it wasn’t until the roof of the cave collapsed, that people discovered it, after which it was opened to the public in 2002. It is called underground version of Pamukkale, as it house the similar white water terraces inside. 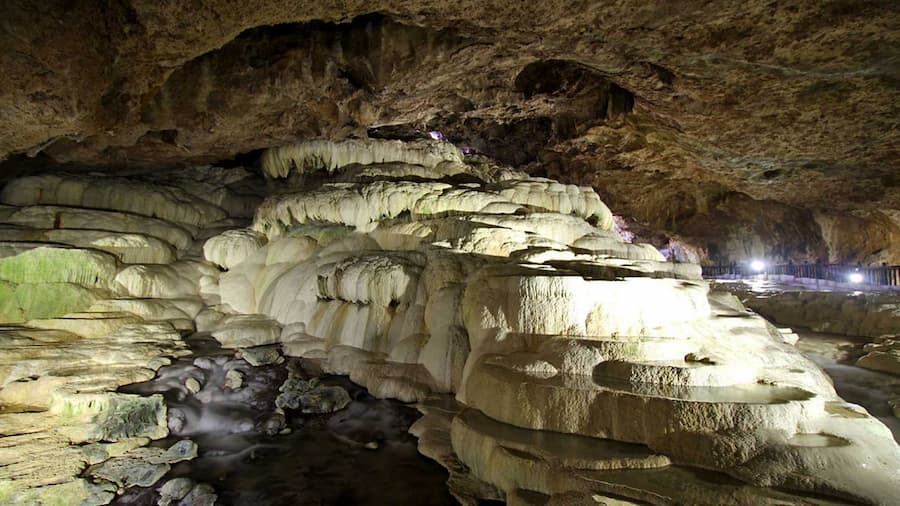 Water pours in from above, at the cave mouth and covers the surface, creating travertine steps with the calcium carbonate deposit left behind. At the same time, the geothermal spring below the cave pushes water into it from the surface. The movement of the water is clearly visible in the clear blue waters below the sinkhole but also happens elsewhere inside the cave.